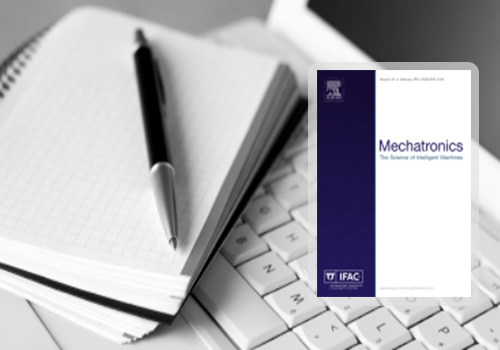 The boom of articulated aerial ladders, a special type of aerial apparatus with an articulated arm and often a cage at the tip, is built as truss structure to reduce its weight and increase the ladder’s working range. Due to the limited stiffness of the truss structure and the large length, the boom is susceptible to vibrations during operation. In this contribution, a model for the coupled bending and torsional vibrations associated with horizontal rotation motions is presented, with model parameters piecewise constant. Using Euler–Bernoulli assumptions for bending and St. Venant theory for torsion, the model in particular takes into account the vertical inclination of the boom, coupling due to non-symmetric cross sections, and coupling introduced by the articulated arm. For a finite-dimensional, truncated modal representation of the system, an active vibration damping control is developed based on a partial state feedback, using a Luenberger observer to reconstruct the vibration modes. Experiments show that the vibration damping significantly increases the attenuation of the modes without inducing unexpected motions of the boom, thus shortening the time required to reach a target position enabling faster operation during emergency situations, and improving overall operational safety.